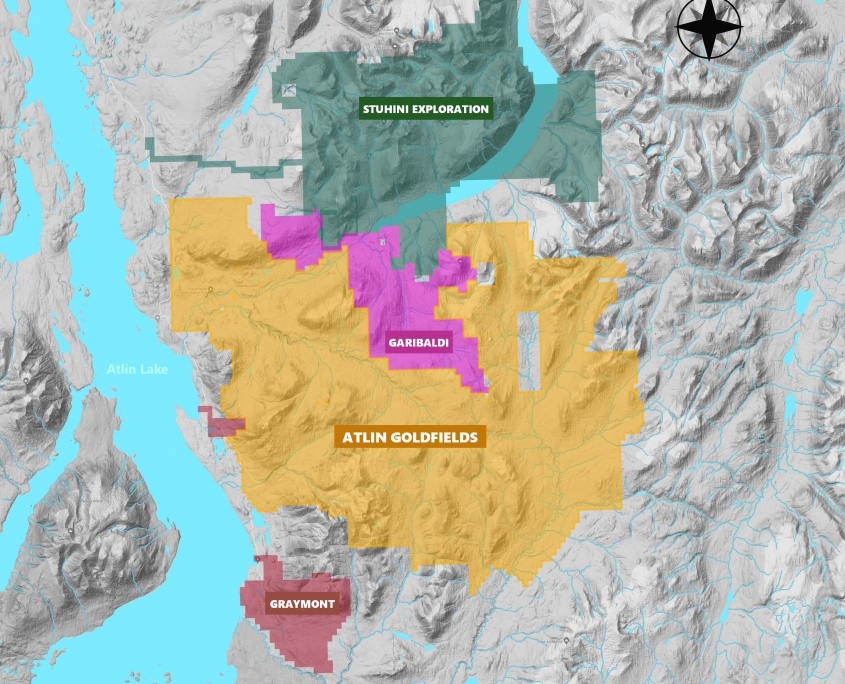 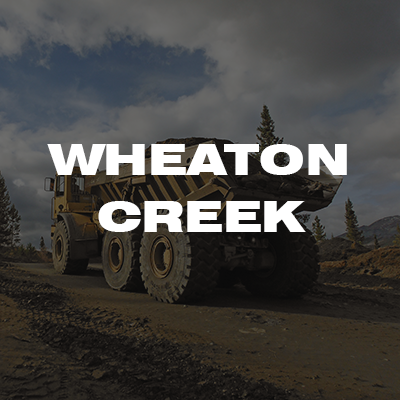 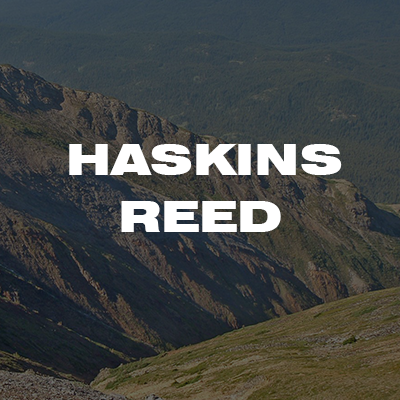 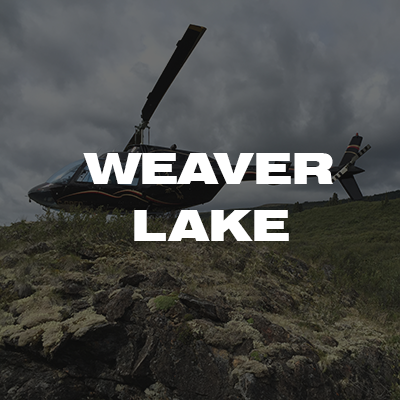 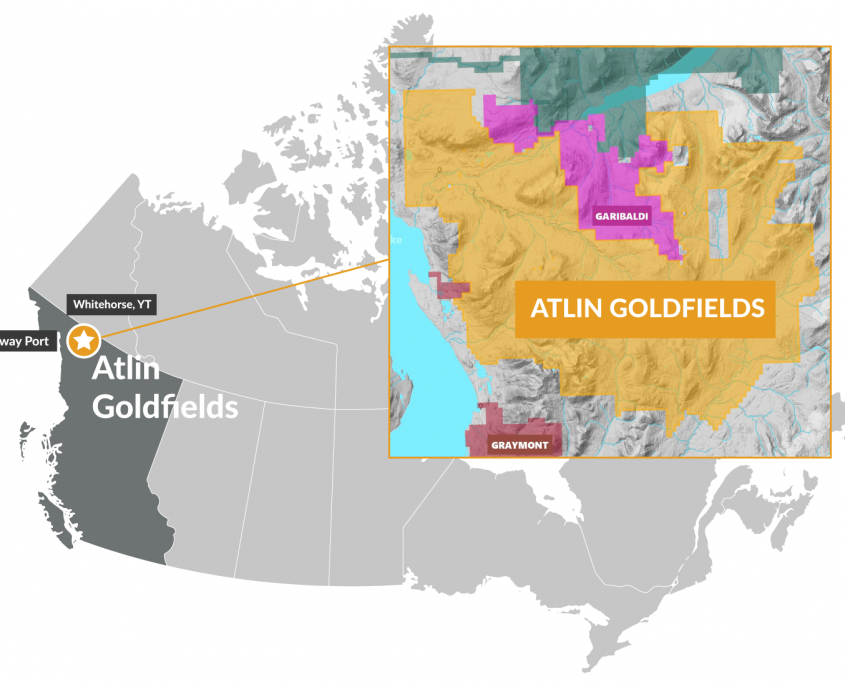 The Atlin gold camp is the second largest gold placer producer in British Columbia with over 600,000 troy ounces of gold produced between 1898 and 1945, predominantly in Pine, Spruce, and Otter creeks.

In the late 1980’s, Homestake Mineral Developments, conducted ground magnetic geophysical surveys over the Yellowjacket zone that outlined a possible fault zone associated with the boundary of the Cache Creek ultramafic complex, which was located directly underneath the placer operations.

Subsequently, diamond drilling discovered an orogenic sheared hosted mesothermal gold zone. This type of mineralization often displays nugget-like gold within quartz-filled shear zones similar to mines such as Bralorne, Cassiar, and Sheep Creek in British Columbia and the Motherlode mine in California.

Brixton initially acquired the property in 2016 and over the years consolidated the mineral tenures into one land package while also completing over 5,000 surface and soil samples, property wide high resolution airborne magnetic survey, and 1,599 metres of diamond drilling in 22 holes. Overall, the Property hosts 24 mineral occurrences of which 17 are associated with gold.

“The Atlin Goldfields Option is the culmination of a lengthy search for a transformational asset to add to Pacific Bay’s portfolio. The significant exploration potential at Atlin provides us with the unique opportunity to build shareholder value, and a notable resource upon which we can further enhance the prospects of the Company towards being a gold producer.” – Antonio Vespa, CEO 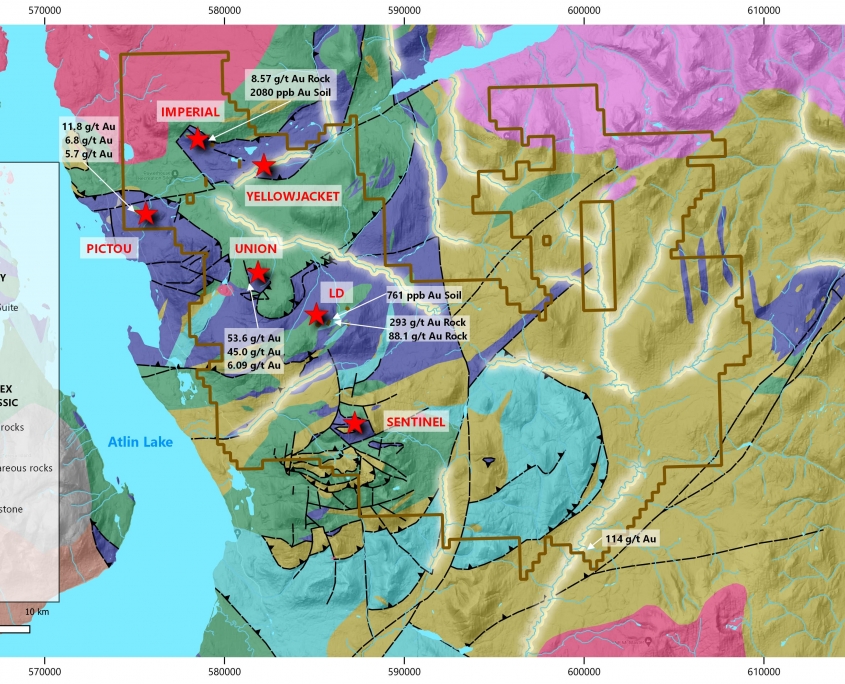 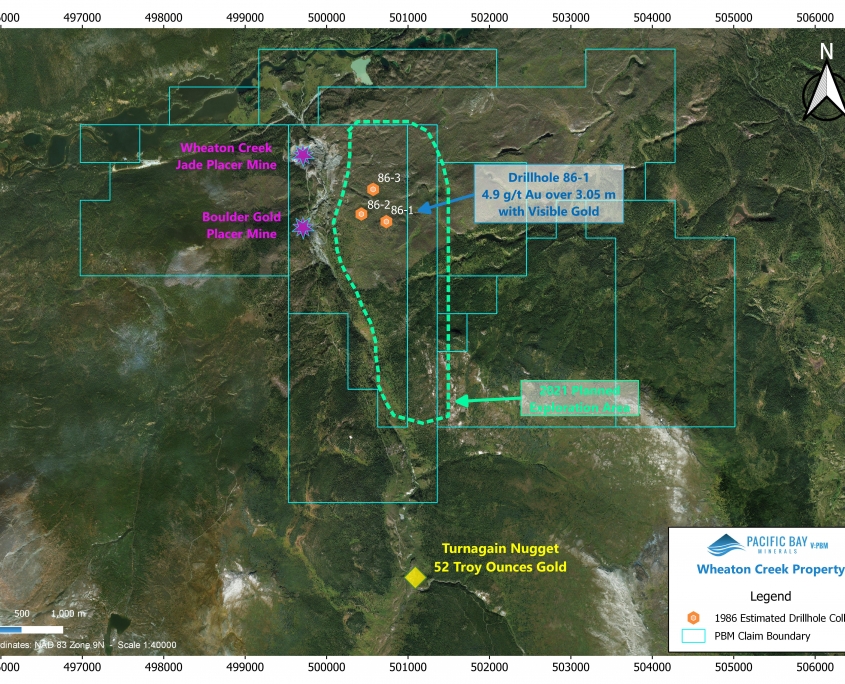 Boulder, near the Turnagain River approximately 60 kilometres east of the town of Dease Lake, has been the site of an active placer gold operation for many years.

Limited exploration has been carried out to date targeting the potential source of the placer gold in the underlying bedrock.

Pacific Bay owns the subsurface mineral rights while the surface placer operation remains owned by the vendor of the claims.

The geology underlying the Boulder placer gold mining area has many similarities to the Cassiar Gold Camp approximately 90 kilometres to the north, where close to 500,000 ounces of gold have been mined from underground quartz veins and surface placer operation.

Cassiar’s McDame Creek produced the largest gold nugget found in BC (72 ounces) and the Alice Shea Nugget, weighing 52 troy ounces, found under one kilometre south of the Property, remains BC’s largest existing gold nugget (presently on display at the Royal BC Museum). 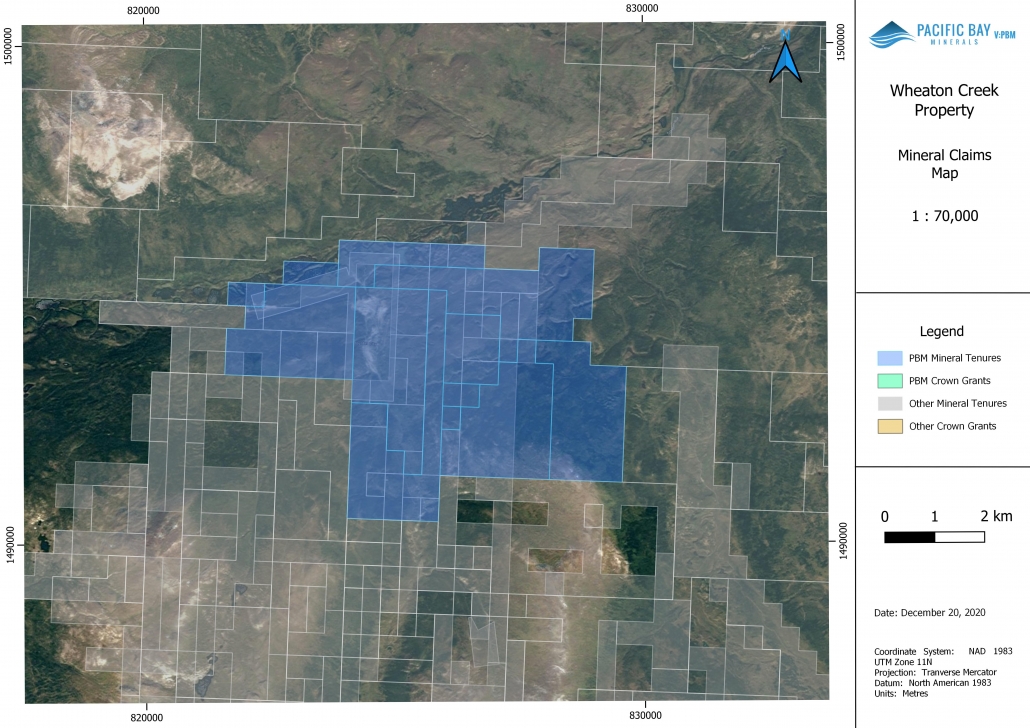 Since 2008, Pacific Bay has invested over $750,000 on the property, including diamond drilling, airborne geophysics, soil geochemistry and other surveys.

The ‘B’ Zone is situated on Mineral Tenure 510712 at the northern end of the Property.  Trenching, drilling and underground development has shown that skarn-hosted mineralization occurs as three lenses with an aggregate strike length of 308 m, an average true width of 8 m, and an average dip of -40° with strong vertical continuity.

In 1972 a shipment of approximately 90 kg of diamond drill core from the B Zone was submitted by Della Mines to Lakefield Research of Canada Limited.  Lakefield determined the head grade to be: 0.75% copper, 0.47% lead, 3.90% zinc, 0.33% bismuth and 120 gpt silver.  Lakefield found that better metal recoveries were obtained by selective flotation. 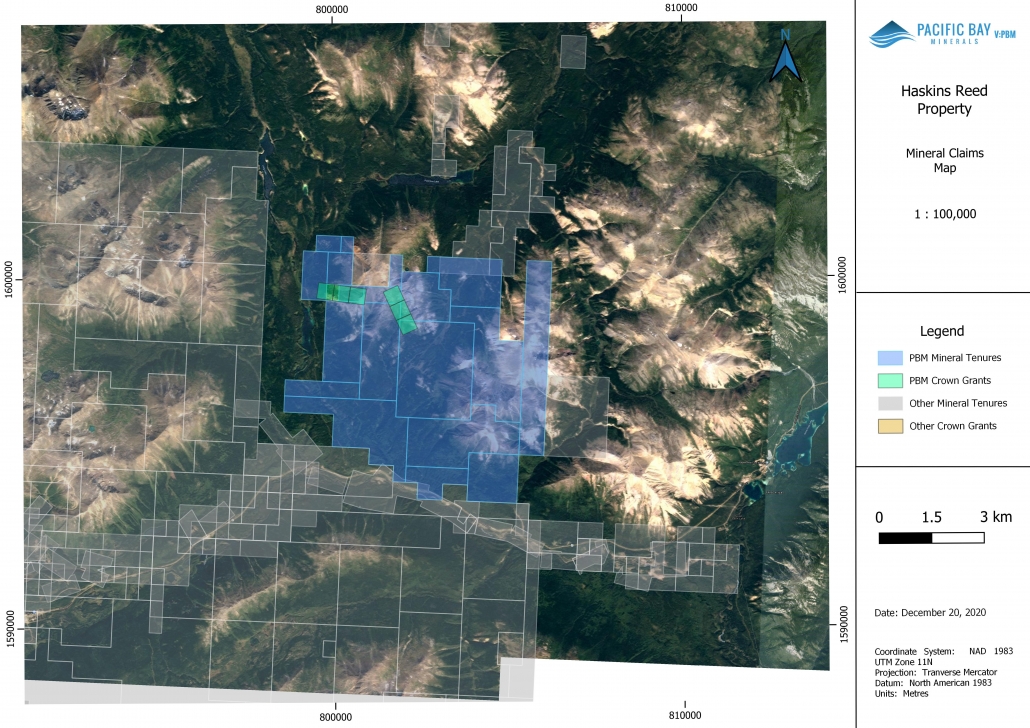 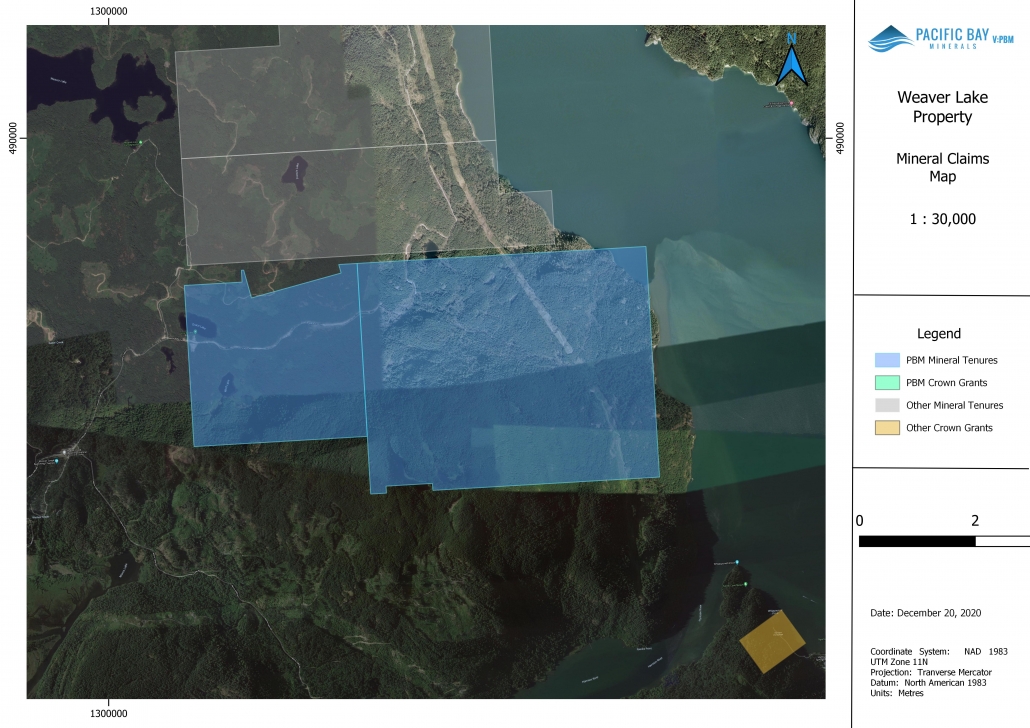 An earlier drill program in 1975 yielded some significant intercepts, including:

*These intercepts indicate total core length only as the true width of the mineralization has not yet been determined.

Download the Plan and Sections of the Weaver Lake Gold Main Zone.