Pacific Bay Announces Letter of Intent to Option Atlin Goldfields Property in BC, and $500,000 Non-Brokered Financing

David H. Brett, President and CEO, Pacific Bay Minerals Ltd. (TSX Venture: PBM, “Pacific Bay” or the “Company”) reports that Pacific Bay has signed a Letter Agreement (the “Agreement”) with Brixton Metals Corp. (“Brixton”) to acquire an option to purchase up to a 100% interest in the Atlin Goldfields Project (the “Property”), located in Northwest British Columbia. The Agreement is subject to the completion of a definitive option agreement, the completion by PBM of a $500,000 financing, and the approval of the TSX Venture Exchange.

“Atlin Goldfields is located in a district known for its prolific placer gold found in the majority of its drainages, which include Spruce Creek, home of the largest gold nugget in British Columbia,” said Pacific Bay VP of Exploration Sebastien Ah Fat, P.Geo. “Historical drilling has found that the source of the placer gold is in close proximity to the creek drainages. We believe Atlin Goldfields has the potential to host extensive mesothermal gold mineralization within the shear zone corridors identified by past geochemical and geophysical surveys. We are looking forward to extensively exploring this property.”

“Atlin is one of BC’s most famous gold districts,” said Pacific Bay President & CEO David Brett. “Brixton has done an excellent job of consolidating and exploring the Property, including compiling a vast database that we look forward to leveraging.”

The Property is situated in Northwest British Columbia, east of the town of Atlin, consisting of a district scale 59,154 hectares of mineral tenures in addition to a Mines Act permit over the Yellowjacket zone authorizing a for 200 tons per day operation. The surrounding infrastructure offers excellent access to the project through its local airstrip, year-round Provincially maintained highway between the town of Atlin and the Property, and gravel roads to the majority of showings on the claim. The property is approximately 175 km by government-maintained highway southeast of Whitehorse, Yukon, which offers daily flights from Vancouver, BC and Calgary, AB; and 249 km east of the Skagway Port. 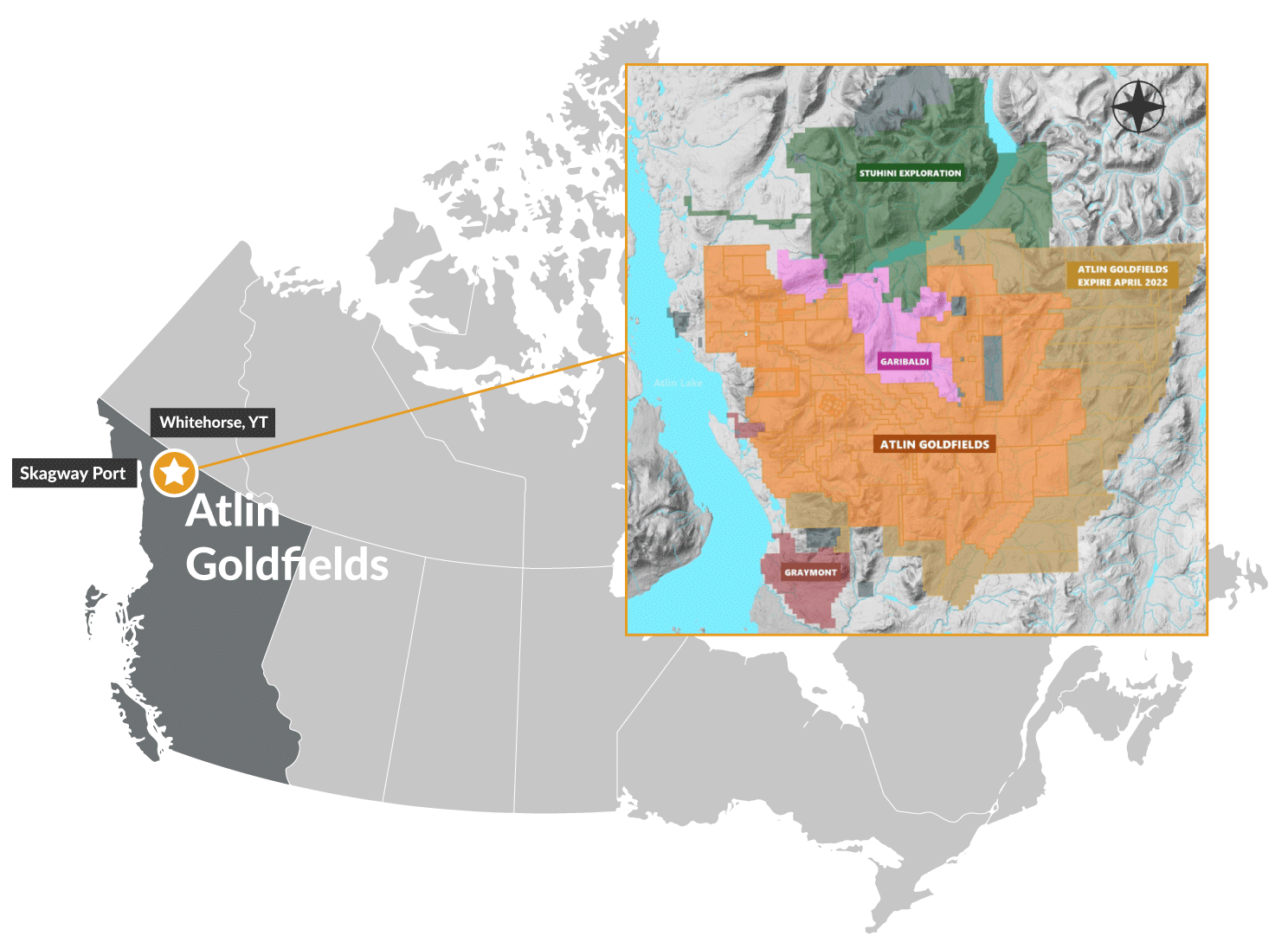 The Atlin gold camp is the second largest gold placer producer in British Columbia with over 600,000 troy ounces of gold produced between 1898 and 1945, predominantly in Pine, Spruce, and Otter creeks. For decades, the source of the placer gold was not fully understood. In the late 1980’s, Homestake Mineral Developments, conducted ground magnetic geophysical surveys over the Yellowjacket zone that outlined a possible fault zone associated with the boundary of the Cache Creek ultramafic complex, which was located directly underneath the placer operations. Subsequently, diamond drilling discovered an orogenic sheared hosted mesothermal gold zone. This type of mineralization often displays nugget-like gold within quartz-filled shear zones similar to mines such as Bralorne, Cassiar, and Sheep Creek in British Columbia and the Motherlode mine in California. Since then, several exploration companies have explored the area, particularly the Yellowjacket zone, where extensive drilling has taken place. Brixton initially acquired the property in 2016 and over the years consolidated the mineral tenures into one land package while also completing over 5,000 surface and soil samples, property wide high resolution airborne magnetic survey, and 1,599 metres of diamond drilling in 22 holes. Overall, the Property hosts 24 mineral occurrences of which 17 are associated with gold.

Table 01: Summary of historical drilling at the Yellowjacket mine.

Table 02: Summary of historical mineral resource estimate at the Yellowjacket Mine from 2010. 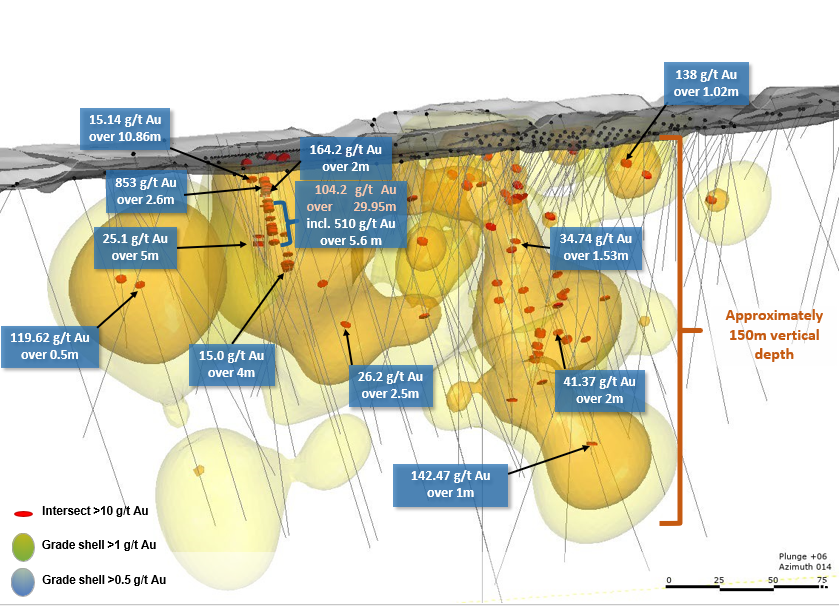 From the Company’s VP Operations, Antonio Vespa, “The Atlin Goldfields Option is the culmination of a lengthy search for a transformational asset to add to Pacific Bay’s portfolio. The significant exploration potential at Atlin provides us with the unique opportunity to build shareholder value, and a notable resource upon which we can further enhance the prospects of the Company towards being a gold producer in the medium term. There is considerable bullish market sentiment around gold, and we believe the timing is right to take on this robust project.” 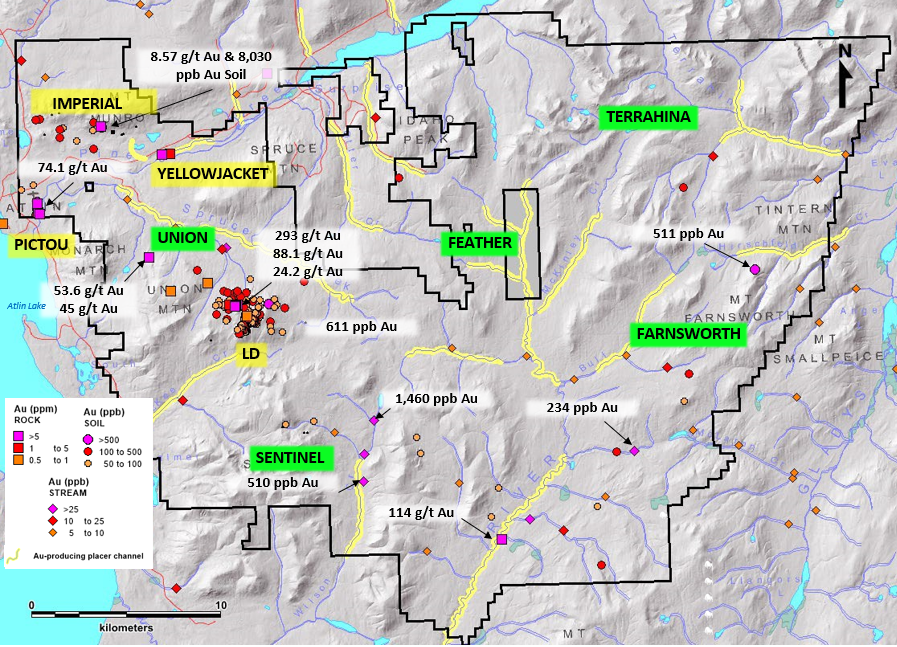 Under the terms of the Letter Agreement, Pacific Bay may acquire up to a 100% interest in the Atlin Goldfields project, by completing the following:

If Pacific Bay exercises the 51% earn-in and elects to not exercise the additional 49% earn-in, Pacific Bay and Brixton will enter into a joint venture whereby the interest in the property will revert to 49% in favor of Pacific Bay and 51% in favor of Brixton, with each party then participating in programs and budgets according to their pro-rata interests.

If Pacific Bay completes the option and acquires 100% of the Property, Brixton will retain at 2% Net Smelter Return Royalty (NSR), with 1% of the NSR purchasable at any time by Pacific Bay for $2,500,000. The Property is subject to a number of additional underlying royalties in favour of other vendors.

All values in Canadian dollars.

Note: The Anniversary date is based on the Completion of the Definitive Option Agreement.

Pacific Bay Minerals confirms that, in addition to available prospectus exemptions for accredited investors, friends, family and business associates, existing shareholders who might not otherwise qualify may participate in this private placement through the “Existing Security Holder Exemption” under BC Instrument 45-534 – Exemption from prospectus requirement for certain trades to existing security holders.

The Existing Security Holder Exemption enables shareholders of a qualifying company at the “Record Date” who are residents of Canada to acquire up to $15,000 worth of securities in that company in any 12-month period. The Record Date for the Pacific Bay offering is March 23, 2022. In connection with the Offering, the Company may issue finders warrants, cash commission, or any combination thereof to certain eligible finders.

The Company intends to use the net proceeds of the Offering towards expenditures required under the Agreement and to be undertaken in order to exercise the option on the Property, as will be further described in the definitive option agreement.

Both the Agreement and the financing are subject to the approval of the TSX Venture Exchange.

All drill intercepts reported in this news release are core lengths only, as the true width of the structures has not been determined.

Sebastien Ah Fat, P.Geo., Vice President, Exploration for Pacific Bay and a qualified person as defined by National Instrument 43-101, has reviewed and approved the technical information contained in this news release.

This news release contains “forward‐looking statements” within the meaning of Canadian securities legislation. Forward‐looking statements include, but are not limited to, statements with respect to: the expected size and use of proceeds of the Offering, the timing for and expected completion of a definitive option agreement, plans relating to exploration of the Property, the magnitude and quality of the Property, spending commitments, and regulatory approvals (including approvals of the TSXV). Such statements and information are based on numerous assumptions regarding present and future business strategies and the environment in which Pacific Bay will operate in the future. Certain important factors that could cause actual results, performances or achievements to differ materially from those in the forward‐looking statements include, amongst others, the global economic climate, dilution, share price volatility and competition, results of exploration activities and development of the Property, risks associated with the completion of a definitive option agreement for the Property or that any such agreement may be terminated or the option not exercised, risks relating to regulatory approvals, and the ability of the Company to complete the Offering as contemplated or at all. Although Pacific Bay has attempted to identify important factors that could cause actual results to differ materially from those contained in forward‐looking statements, there may be other factors that cause results not to be as anticipated, estimated or intended. There can be no assurance that such statements will prove to be accurate, as actual results and future events could differ materially from those anticipated in such statements. Accordingly, readers should not place undue reliance on forward‐looking statements. Pacific Bay does not undertake to update any forward‐looking statements, except in accordance with applicable securities laws.

Pacific Bay Minerals to Resume Trading on the TSX Venture Exchange on May 2,...
Scroll to top